My name is Kelly Wolf, and I am a murderer. I plan my kills far in advance, determining each detail – who the victims will be; how they will die; what will transpire in the aftermath. Everything. 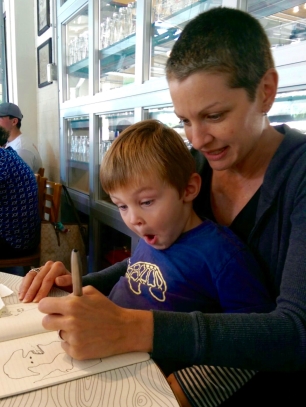 Here’s my nephew figuring out his aunt is a sociopath.

[Really he was just wowed by my drawing skills, which are only impressive if you happen to be 4.]

But here’s the thing about being a killer: there’s a big difference between the planning and the execution.

For a couple of weeks now, I have strategically avoided working on the second book of Aret. This was an unconscious process, helped along by the fact that I’ve started another job, which offers plenty of convenient distractions. I am also quite skilled at finding diversions around the house as needed. Hmm…I should probably wash the sheets, brush the dogs’ teeth, patch my jeans, wipe down the windowsills, write a letter to my grandmother…

It wasn’t until yesterday afternoon that I realized why I’ve been dodging my book. I have arrived at a section in which a bunch of tragedies occur. And I don’t want to write it. 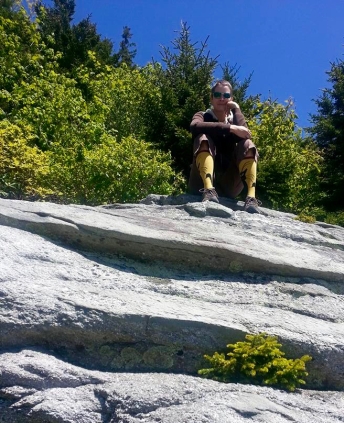 Portrait of an avoidant killer

To hold a reader’s interest (and to mirror life), stories need conflict, sometimes to a terrible extreme. At some point, especially during the course of a fantasy trilogy, the antagonists triumph. They are stoked. Of course, that means the protagonists face defeat and are devastated, which royally sucks.

As a writer, it is one thing to map out the events of a story; it is quite another to put down the words. Systematically slaying the characters I have worked with great care to create is uncomfortable, to say the least. Not only does it trigger feelings of sadness and guilt, but it also eliminates my freedom to hang out with those characters ever again.

However, these cruel deeds are necessary, and although I must tromp through many pages of depressing text to get there, I see the light of hope at the end of the tunnel of despair I’m about to create. So I suppose it’s time to quit stalling, put on my big girl britches, and go kill someone.