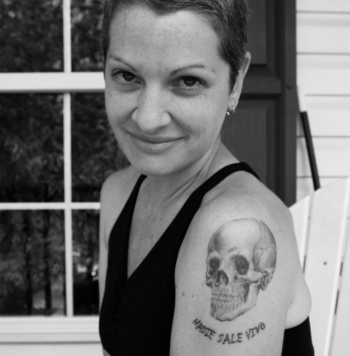 I got this lovely skull carved into my arm about a decade ago. Nadie sale vivo means No one leaves alive, and people’s thoughts on that phrase vary considerably, from the Tico in Costa Rica who interpreted it as: “Me tocas, y no sales vivo” (essentially: Touch me and die), to the guy who saw it at a party and launched into a murderous rampage speech à la Amanda Plummer in Pulp Fiction, which was not only loud and annoying, but also completely inaccurate.

Nadie sale vivo isn’t meant as a threat. It doesn’t mean I’m planning to kill everyone; it means we’re all going to die. I think of it as a cross between Carpe diem & Memento mori, and I’m grateful that skull’s on my arm, observing me through cavernous eyes with the continual reminder: Live life now.

People tell me they think about Nadie sale vivo when contemplating risky decisions that require the transcendence of fear. While I love those stories, I also wish folks would consider the brief, fragile state of our mortality when deciding how to interact with one another, especially in the realm of cyberspace, where pseudo-anonymity and physical distance create a weird, false sort of “courage,” leading to a shit ton of pointless ugliness.

If you read the average internet comment stream, it appears that everyone’s itching to have a rageful meltdown. Even something as innocuous as a video of a baby elephant playing in a puddle will be followed by some inexplicably-furious, all-caps declaration like: “ELEPHANTS ARE MURDERED EVERY DAY IT’S HORRIBLE THAT YOU’VE EXPLOITED ELEPHANTS LIKE THIS I CAN’T BELIEVE WHAT MONSTERS PEOPLE ARE TO MURDER ELEPHANTS!!” Following that, of course, will be a string of five hundred comments from other people insulting the original commenter and/or one another, all along the spectrum from “You’re an idiot” (or more likely “Your an idiot”) to “Eat a bullet” (it is unbelievable how many death threats fly around between strangers on the internet). All because of a baby elephant playing in a puddle, which really deserves only one comment: “Aww cute <3”

Here’s a bit of unsolicited advice from your old pal Kelly (I’m big on offering my 2 cents without being asked). Let’s use our tiny shreds of life – the brief sparks in the universe that we’ve been granted – to be good people and do good things. To start, what if we all decided to have extremely positive reactions to things, instead of extremely spiteful reactions? Returning to the above example, the all-caps declaration could read like this: “OH MY GOD I LOVE BABY ELEPHANTS MORE THAN ANYTHING THEY ARE SO ADORABLE I COULD JUST EXPLODE THIS IS PROOF THAT THE WORLD IS UNBELIEVABLY FREAKING AMAZING BECAUSE HOLY SHIT BABY ELEPHANTS!!!!”

After all, each of us has a finite number of heartbeats, inhales, and exhales, so let’s not waste them spewing vitriol at one another. The angrier we get, the stupider we get (this is a biological fact), and nothing productive comes from insults, name-calling, or death threats. Everyone just gets angrier and stupider. If you need further proof of this (aside from the irrefutable neurological evidence), take a look at the current state of our nation. We are an angry, stupid mess.

I vote that we kick our self-righteous, reactionary b.s. to the curb, rise above the fray, and try out some extreme, all-caps positivity. At the very least, we could make each other laugh, and laughter, unlike blind rage, is actually good for us.

I MEAN WHAT THE CRAP DO YOU SEE HOW RIDICULOUSLY GORGEOUS THIS BUTTERFLY IS JUST LOOK AT THOSE WINGS THEY’RE LIKE STAINED GLASS FOR CHRIST’S SAKE AND THAT LITTLE FACE! OMG! THE CUTENESS! IT BURNS! AND IT’S EATING FROM A GODDAMN PINK POOFBALL!!!!

[P.S. – Along these same lines, let’s please stop calling each other hypocrites. It is entirely redundant to call another person a hypocrite. We’re all hypocrites. There’s no such thing as perfection when it comes to human beings. Mahatma Gandhi beat his wife. So there ya go.]