Devon Sorvari is in the process of recording the audiobook for Aret (perhaps even as I type), and her last email to me began with these words:

“Okay, this is so exciting.”

And yes. She’s right. This is so exciting. Aret will be released next month with the audiobook soon to follow (provided I get my butt in gear and nail down an editor), and then I can focus on book #2. And #3. And another book I wrote that has nothing to do with dragons. Woo hoo! So much writing to do! So many stories to tell! SO EXCITING!!

Even more exciting than hurling water into your own face

…or swinging from exposed beams 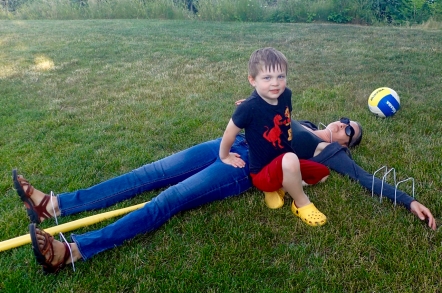 …or getting stapled to the lawn.

When I sent Aret’s first draft (which was very drafty, indeed) to my husband in the fall of 2012, I had no idea if the story would make sense to anyone but me. After all, I’d written it while living alone in a tiny house on an island, and while I’d enjoyed the prolonged isolation, even I had to admit I’d gone ’round the bend a bit. Thankfully, he assured me it did make sense, which was far better than the response I’d feared, yet expected (“Come home immediately so I can check you into a hospital”).

And now, after 3+ years and I-don’t-even-want-to-think-about-how-many revisions, the time has come. It’s ready. I can hardly believe it.

I still have dozens of little things to figure out over the next few weeks, and my strategy for doing so continues to be: Go Paddle Boarding – but I have faith that everything’s going to come together and be fine, just fine. (Plus I have a nice tan, and my deltoids have gotten wicked strong.)

I may have utilized my go-to strategy today, in fact.

I once knew a guy whose girlfriend was fiercely anti-romance. Whenever he said something mushy to her, she’d call him the President of the Velveeta Cheese Factory. At the risk of assuming that position myself, I need to offer up some big thanks to the folks who’ve helped me get this far, because I’m so full of gratitude right now, I feel like I might explode.

To Frank, JR, Kay, Celeste, Sean, Kate, Sheri, and Andrea, who slogged through those terrible first drafts, offered ideas, and encouraged me to keep going. To Vicki Lane and the UNCA novel-writing class for flooding me with feedback from people I don’t know (which, as it turns out, is a good thing). To Betsy for the meticulous, word-by-word final edit. To Stacey, Susan, and Rita – the wonderful women in my writing group – who consistently urge me to slow down and show more.

To the members of my pre-release book club – thank you for the ideas and the laughter, and for introducing me to the concept of dragons farting rainbows.

To all the people who send me dragon stuff, from toys to books to costumery to memes to art pieces to Julie’s “fire-breathing sky dragon” that she pulled off the road to capture for me one day.

Y’all have no idea how much it means to receive all those dragons, or how cool it is to know that people encounter dragons in their worlds and think of me.

To Marcos and Devon, who enthusiastically agreed to take on huge projects, just because they’re so very awesome.

And to all the other members of my Aretian band (you will receive proper acknowledgements in the book itself) ~ I wouldn’t be this close without your guidance, support, and encouragement. Big heart love to you all.

This is so exciting. 🙂

8 thoughts on “Okay, This Is So Exciting”