When a loved one dies, a familiar bit of counsel to receive is this: Hold onto your memories; they will give you comfort. At this point in my life, I’ve lost enough folks to know it’s good advice. At first, the memories may feel like a razor slicing through your heart, but after some time, they soften and grow kinder, and while they’ll likely trigger tears, they may raise a smile as well.

A few days ago, my 95-year-old grandmother passed away. She was the namesake of her grandmother Alice, a cold and distant woman she never liked, but the name she went by was Jill, as she had a twin brother named Jack. The name by which I knew her, however, was Gaga.

Gaga with her daughters

My sister Katy was the first grandchild, and when she tried to say “Grandma,” it came out as “Gaga” (her articulation has improved since then). Thus, my grandmother was named, and from that point on, all the grandkids called her Gaga. For many years, mentioning this name to others (particularly my peers) led to snickers and raised eyebrows (“Gaga? You call her Gaga? Like goo-goo, ga-ga?”) but several years ago, the reaction shifted to: “Oh, like Lady Gaga? Right on.” So that was helpful. I really don’t know much about Lady Gaga besides the fact that she did a kickass Super Bowl halftime performance and once wore a meat dress, but I’m eternally grateful to her for legitimizing my grandmother’s title.

Unlike her own grandmother, Gaga was the epitome of cheerfulness, warmth, and encouragement. Oftentimes, when a camera was aimed at her, she would strike a wildly enthusiastic wave-and-smile pose, despite my grandfather’s reproaches (“Jill, why do you do that? You look deranged!”). But she didn’t care. She just wanted folks to know she was happy. 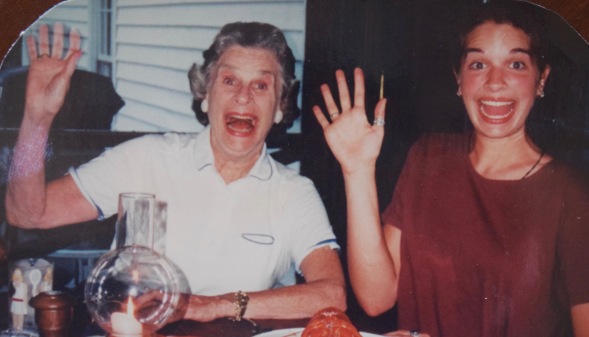 Here I am trying it out. Gotta say, it was pretty fun.

Gaga had a wonderful sense of humor. About 20 years ago, a county in Texas decided to change their official greeting from “hello” to “heaven-o” so their God-lovin’ citizens wouldn’t have to say the word “hell” so often. From the moment Gaga heard that story, she adopted “heaven-o” as her own personal greeting as well, not because she minded saying “hell,” but simply because the whole thing was so hilarious and absurd.

Gaga with her BFF Nancy. These two were like a live action comedy duo.

Although she was nonviolent, at least in practice, whenever Gaga heard a story about a person doing something terrible, she’d say, “Get me my gun!” She didn’t really have a gun (thank goodness), so one year for Christmas, my parents bought her a Lone Ranger toy gun set.

Gaga got her gun

It was all fun and games until my grandparents went to the airport to fly home. After Gaga walked through the metal detector and retrieved her screened carryon from the conveyor belt, she turned to Papa with a big smile and said, “They didn’t get my gun!” Homeland Security was unamused, but kind enough not to drag her off to jail.

Many of my Gaga memories center around Christmas, a holiday we spent together for almost 40 years.

Gaga filled our Christmases with laughter, as she had a habit of forgetting what was inside gifts as soon as she wrapped them. Therefore, this exchange occurred pretty much every time someone was handed one of her gifts:

Person holding gift: “It’s from you!” 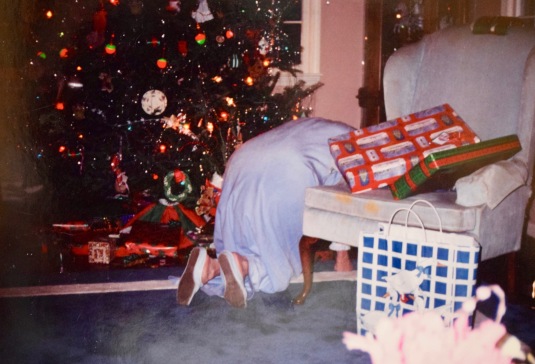 Looking at photos of my grandparents brings to mind this little dialogue my mom overheard during a phone call with Gaga years ago, right after she and Papa had returned home from a town fair:

Mom: “So what did they have there?”

(Papa says something in the background. Gaga sighs, then continues in a cranky tone.)

Gaga: “Your father says it was a bunch of crap.”

Papa: “I said it was a bunch of crafts.”

Mortality is irritating. While I realize it’s necessary, I’m still not a fan, as death has claimed some of the best people I’ve known – people who were uniquely wonderful and made this world a better place. I have my memories, and they do offer a harsh sort of comfort. But at the same time, I am left with this truth: There is nothing, nothing at all, that can replace the singular magic of grandparents. 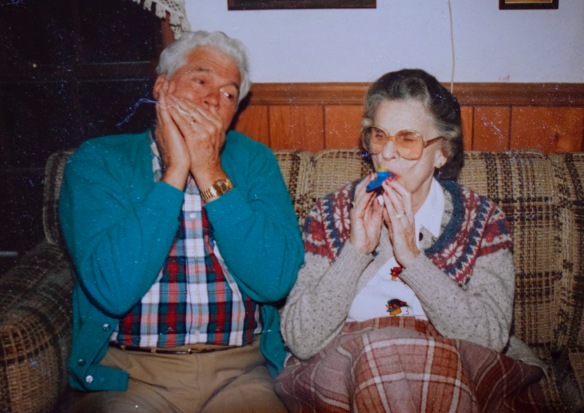 2 thoughts on “The Original Lady Gaga”