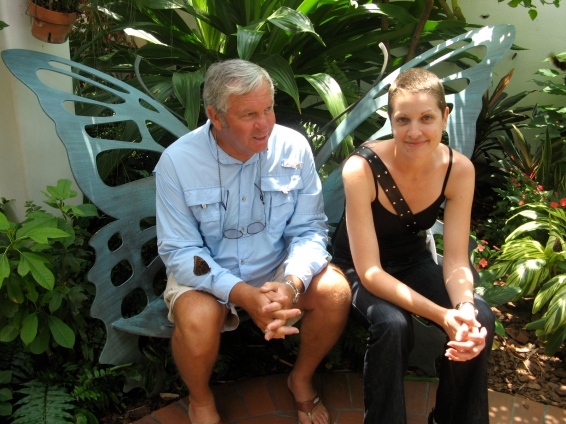 My parents celebrate their 50th anniversary today. When they got married in the summer of ’68, Dad was 25, and Mom was 3 days shy of her 20th birthday, which means this year brings other milestones as well: Dad’s 75th and Mom’s 70th. To honor their awesomeness, I’m going to write something about each of them. Dad was born first, so he gets Post of Honor #1.

Because I’ve been in the counseling field for almost 20 years, I tend to avoid things like talk radio, podcasts, and Ted Talks. The last thing I want to do outside of work is spend more time listening to people talking. But Dad’s talks are different. Like precious gems, they are both rare and valuable. The ones that stick out most in my memory are those that came during times of transition, usually right before a big move.

Dad Talk #1: On the night before I headed to college, Dad told me we needed to talk. He took me aside and said this: “At the place you’re going, there will be a lot of kids who are smarter than you and a lot who have more money than you. And I don’t want you to forget who you are.” His warning stuck with me, and each time my identity got derailed throughout the college years, his words helped me find the way back to myself.

Dad Talk #2: Six years later, when I made the decision to move from the East Coast to California, Dad sat me down for another talk. “All right, there’s something important I need you to know,” he began. Tears sprang to my eyes as I prepared for a heart-wrenching farewell speech, but what came next was this: “If you’re attacked by a mountain lion, you need to fight. You can’t play dead. It’s the same with black bears. Playing dead only works with grizzlies. Black bears and mountain lions will kill you, so you’ve got to fight.” I said, “Okay, Dad,” but what I thought was, If it comes down to hand-to-paw combat between me and a mountain lion, I will not win. I will be cat food. He did get a little more emotional after that. Once I’d agreed to fight off mountain lion attacks, he added, “I hope you don’t like it out there. But I know you’re going to love it.”

Dad Talk #3: Fast-forward fourteen years. When Dad caught wind of the fact that I was planning to move from Oregon to San Diego, I received a voicemail: “It’s your father. Call me.” Since his usual message was: “Kelly, call your mother,” I figured it was serious and called back right away. “Your sister tells me you’re thinking of moving back to California,” he said. Before I had a chance to respond, he continued, “Your nephew is moving to North Carolina, and he’ll need his aunt and uncle. It’s time for you to move back east. Your mother misses you.” The way I figure, if someone I love and respect gives me one stern directive every couple decades or so, I should probably follow it, so my husband and I packed up and moved across the country. That was five years ago. Now we have two little nephews, and it’s awesome to be a part of their lives.

Of course, Dad has taught me way more than what I gleaned from those three talks. He taught me to fish, shoot, play sports, face fears, be true to my word, appreciate the outdoors, keep an open mind, hold myself to a high standard, treat people with respect, and be an honest and genuine friend. He also taught me that vanity is stupid, which is an invaluable lesson. He once dreamt that he had a bald spot on the back of his head. Upon waking, he decided it was true, then retained the belief for an indeterminate period of time (weeks? months?) until he happened to mention his bald spot to Mom, who informed him that it didn’t exist. I just love the fact that he never checked.

Speaking of hair, that hairy beast is ’90s me, fishing off the seawall with Dad

Many years ago, back in my mountain-lion-battling California days, I gave a training to a group of child advocates. At the end of the session, one of the trainees stayed behind to ask me some follow-up questions. He let me know he was a single dad raising two teenagers, and we chatted for a while about kids, families, and child rearing practices. Before he left, he asked if I was raised by both of my parents, and I told him I was. “Were you close to your dad?” he asked. I said I was and still am. “It shows,” he said with a smile. That was one of the best compliments I’ve ever received.

Leave a Reply to F is for Felicity! Cancel reply