[Disclaimer: In general, I am not a woo-woo person. However, this is a woo-woo (yet true!) story. If that sort of thing makes you gag, you may want to leave now.]

The first time I saw the forest dragon was on 11/11 in 2012, when I took a visiting friend on my favorite hike in Moran State Park. It was a chilly day, and by the time we reached the summit of Mt. Pickett, it had started to snow. 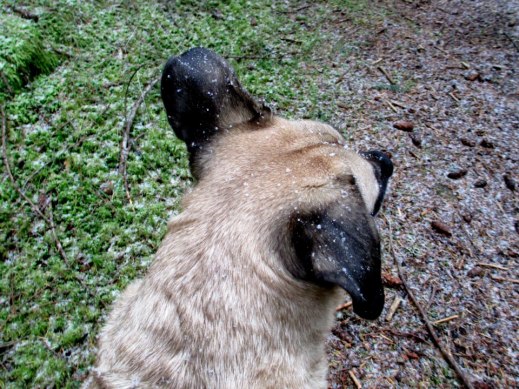 Snow falling onto a carpet of green moss is quite lovely, but as we descended the trail towards the Twin Lakes, the snow turned to sleet, then rain. My friend and I hurried along the path, our wool hats and sweaters growing heavy in the downpour. At one point, I noticed an upturned root system that resembled a giant dragon head. I wanted to stop and take its picture, but given the weather, I chose to continue down the trail, knowing I could come back another day when conditions were more favorable (and less likely to ruin my camera).

On November 15th, I returned to Moran in search of the dragon. Soon after I left the summit of Mt. Pickett, I saw a root system that was vaguely dragony. I stopped and stared at it for a long time. Although it wasn’t anywhere near as cool as I’d remembered, I chalked up the discrepancy between my idea of the dragon and its reality to my deplorable visual memory. With a profound feeling of disappointment, I took a picture of the sort-of dragon, then continued down the trail.

About twenty minutes later, I came upon a section of forest that was so ethereal, it brought me to a dead stop. As I scanned the path before me, I noticed my shadow encircled in a rainbow of light.

I couldn’t quite capture the rainbow aura, but you get the idea.

I began to fan my arms through the air, which made the light glimmer all around my shadow’s circumference. That looked incredibly cool, so I continued doing it for…I don’t know…ten minutes? (This is what happens when someone like me lives alone for too long.) When I’d finally had enough, I glanced to my right, and there, shrouded in mist, was the forest dragon.

No shit. It was right next to me. If I hadn’t been halted on the trail by rainbow-encircled Shadow Me, I would’ve marched past it, especially since I wasn’t even looking for it anymore, as I’d convinced myself that I’d already found the dragon from the other day.

I was beside myself. I did a happy little dance on the trail (again – too much time alone), then climbed up to the dragon, gave it a hug, clamored around on spongy soil to view it from the other side, and saw this:

I took one shot and knew I didn’t need another. When I sent the photo to my husband later that day, he wrote back: “That should be the cover of Aret.”

I think about that dragon a lot. I wonder what it looks like now. I hope it’s still there, looming on the side of the trail, perfectly intact, waiting for me to come back and visit. 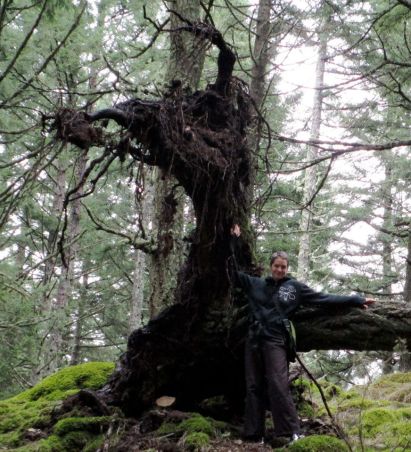