Lots of people like to be scared. They adore those horror movie moments after the tension has built to an excruciating level, the creepy music hits its crescendo, and something terrifying happens. With shrill screams, they leap into each other’s laps, clutching their hands over thundering hearts. And then they laugh, because they love that post-terror feeling.

I am not one of those people. Despite believing things like skulls, snakes, huge, predatory cats, and extreme heights are really cool, being frightened out of my wits does not please me. Therefore, I avoid horror movies as if they were a cinematic form of poison.

Unfortunately for me, my husband and I watched something really scary last night. I feel like I got tricked into it, because the show we were watching is normally eerie, not jump-out-of-your-skin scary. About ten minutes into the episode, when I realized the nature of its content, I commenced the internal dialogue normally used to get me through these awful experiences:

You can handle this. People do it all the time. They even like it. Try to channel whatever weird qualities those people have. If that doesn’t work, put your hands over your eyes.

So I sat and watched the horror unfold, which it did in a predictably awful and disgusting manner. When there were five minutes left and I was almost out of the woods, out of the corner of my eye, I saw a black blob pop up at our front window. Thus, I commenced another internal dialogue, this one used to soothe myself when I know my brain is being a jerk:

Don’t be ridiculous. There is nothing at the window. You’re just torturing yourself. This is why you’re not allowed to watch scary things.

With newfound confidence, I turned and looked at the window, and THERE WAS TOTALLY SOMETHING THERE, STARING RIGHT AT ME!!!!  😫

While my breathing ceased entirely and heart tied itself in a knot, I dove towards the window, and the intruder/murderer/ghoul/poltergeist bolted away. Knowing I would never sleep again if I didn’t get to the bottom of the situation, I peered out the window onto my front porch, where a little, black cat, looking quite alarmed, crouched at the top of the stairs.

Here is the number of times in my life that a random animal (cat or otherwise) has appeared suddenly at my house to leap up and stare in a window: ZERO. So why that had to happen while I watched a terrifying show on the night before Halloween, I’ll never know. 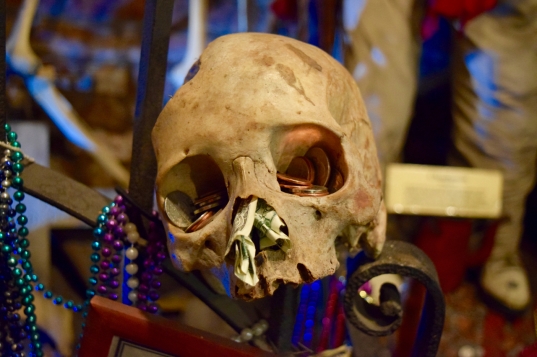 Next time I have the chance to make an offering for voodoo protection, I’ll take it.