I have a new alter ago. Her name is Angry Fairy. She grew out of a conversation I had with my husband, during which I revealed that I prefer to do nice things for strangers if they’re not around to notice. This is mostly due to my introversion, although it’s also fun to think of people happily discovering unexpected kindnesses. When my husband learned about this, he said I’m like a fairy, flitting about to leave a path of mysterious, magical deeds behind me. At first, I didn’t like the idea, since I’m a pretty giant person with a shaved head and don’t identify with fairies much at all. But then I thought, What if I were an ANGRY fairy? Like, someone who does hidden good deeds but is generally kind of pissed off? That image seemed to fit, and thus my new identity was born.

Here are my future plans for Angry Fairy: I will continue to do secret, helpful things, but from now on, I’ll leave a note behind that reads: “This good deed was brought to you by the Angry Fairy.” Over time, people will grow accustomed to my sweet little gestures. They’ll post photos of Angry Fairy’s notes on their various social media platforms, and other people will like and share them, and before you know it, society will have grown to love this grumpy-yet-benevolent vigilante.

Oh, but there’s a master plan behind it all, folks. Isn’t there always? Because after everyone has grown fond of the Angry Fairy and her helpful shenanigans, I’m going to run for President. It will be the weirdest campaign ever (although at this point, that’s hard to imagine). Instead of kissing babies, I’ll kiss baby goats.

I will openly schmooze with the strangest of characters. 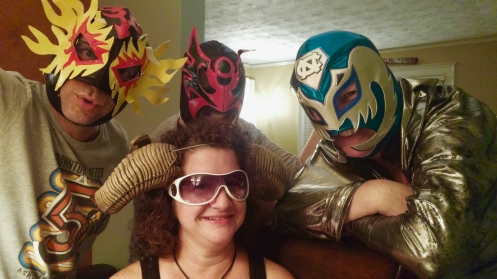 To travel between campaign stops, I’ll paddle board. Yessiree. Even in a damn dress. And since, as we all now know, you don’t need to have any political or diplomatic experience whatsoever to hold the highest office in the land, I’m going to win. Yahoo! My first order of business will be to insist that everyone call me President Angry Fairy (or President AF for short, because I am going to be presidential AF).

Here is how President AF will run things: whenever an issue is brought before me, in bill-form or otherwise, the issue-bringer will be required to explain why that issue is so critical that it requires immediate attention. So say, for example, the issue regards the deregulation of lead ammunition usage on federal land. The person placing that bullshit idea before President AF will have to tell me why that particular point of focus is more important than…oh, let’s say: failing public schools, mass incarceration, the continued outsourcing of American jobs, opiate addiction, air and water pollution, child sex trafficking, crumbling infrastructure, the diabetes epidemic, etc. And if that person, after being summarily shut down, then happens to bring up another issue (this one perhaps suggesting that it’s just fine to shoot a hibernating bear in its den), he/she/they will be promptly shot into space.

Because President AF won’t play. I may have to do some finagling with the Constitution here, but as we’ve also learned as of late, these days, that’s totally on the table.

And I will do my best to keep up with the secret little deeds, though that may be more difficult with the Secret Service all up in my face. If I manage to dodge them, my first order of business will be to sneak into the Supreme Court Building to sprinkle rose petals in the Notorious RBG’s chambers. Then I’ll tiptoe into the Capitol Building and write “Feel the Bern” and “Nevertheless she persisted” in Sharpie on the backs of alternating chairs.

How’s that for a platform, folks? I’d say it’s golden. Plus, in my humble opinion, it would be far better to have an Angry Fairy in the White House than the volatile, bigoted, spoiled brat we’ve got now.

6 thoughts on “Angry Fairy for President”